Ralph Alessi & This Against That @ BOP STOP 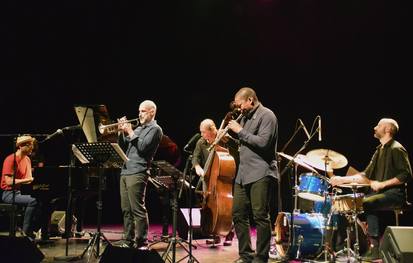 Ralph Alessi & This Against That is a group that organically tows the line between jazz, pop and contemporary classical music. The band has toured Europe and the United States since 2004 playing venues such as The Earshot Festival in Seattle, RedCat Theatre in Los Angeles, Bimhuis in Amsterdam and The New Morning in Paris. The band has 3 releases and in February 2019, they released “Imaginary Friends” on the ECM record label. Featuring:

Trumpeter/Composer Ralph Alessi was born in San Francisco,CA, the son of classical trumpeter Joe Alessi and opera singer Maria Leone. After taking degrees in jazz trumpet and bass—he studied under the legendary Charlie Haden at CalArts—he lit out for New York, where he swiftly became an ubiquitous presence on the downtown scene. He's been a frequent collaborator with such notable musicians as Steve Coleman, Jason Moran, Don Byron, Ravi Coltrane, Fred Hersch, Uri Caine and Marc Copland. Alessi has recorded nine albums of original compositions which draw on everything from post-bop to neo classical music. He currently records for the ECM record label including his 2016 release Quiver. In 2018, he will release a new This Against That record on the label. As an educator, Ralph is an Assistant Professor of Jazz Studies at University of Nevada-Reno as well as the director of the School for Improvisational Music.

“An individualist with a style and sound all his own"….Downbeat Magazine

"Alessi has "drop-dead trumpet chops and his music is as clean and airy and sophisticated and disciplined as post-modern progressive jazz gets…." Jazz Times

ABOUT THE BAND MEMBERS:

Jon Irabagon “Saxophonist Jon Irabagon is a subverter of the jazz form,” declares Martin Longley in his Irabagon feature in the August issue of The New York City Jazz Record. “He’s a revolutionary who’s secretly messing with the changes. He might be dismantling the music’s mechanics from the inside, but from the outside he can frequently persuade a crowd that he’s an old- school practitioner. There are few players who can so deftly stride from postbop to free improvisation, avant country to doom metal and then wander from chaotic collage-spraying to sleek-blowing fluency.”

A fearless, versatile explorer, pianist/composer Andy Milne has been a distinct and respected voice at the heart of New York’s creative jazz scene for over 20 years, collaborating with dancers, visual artists, poets and musicians spanning jazz, classical, pop, folk, and world music. At the piano he skillfully blends poetic gravitas with a playful sense of order.

He has recorded and toured throughout the world with Ravi Coltrane, Ralph Alessi, Carlos Ward and Carla Cook, and has collaborated with a range of artists including Andrew Cyrille, Sekou Sundiata, Avery Brooks, Bruce Cockburn, Fred Hersch, Ben Monder, Dianne Reeves, Jen Shyu, Tyshawn Sorey and Jamie Baum. A former student of Oscar Peterson, Milne was at the center of the M-BASE Collective as a core member of saxophonist Steve Coleman’s bands, as well as performing with Cassandra Wilson and Greg Osby. Milne composed and produced the scores for seven documentary films by acclaimed director William Shatner and has released nine recordings as a leader or co-leader. He is the recipient of numerous awards and commissions, including the prestigious Civitella Fellowship. Milne draws inspiration from politics, philosophy, homeopathy, comedy, and science fiction, with musical influences that bridge Thelonious Monk, Art Tatum, Herbie Nichols, Bela Bartok, Joni Mitchell and Stevie Wonder.

Bassist/composer Drew Gress performs extensively with artists on the cutting edge of contemporary improvised music. His latest project-The Irrational Numbers (Premonition), features DrewԳ original compositions for quintet. Earlier releases include the critically-acclaimed 7 Black Butterflies (2005), Spin & Drift (2001), and Heyday (1997). Future projects include a new quintet project, a solo bass recording, and an electronics projectȳoon to be unveiled. Drew can also be heard within the ensembles of John Abercrombie, Ralph Alessi, Tim Berne, Don Byron, Uri Caine, Bill Carrothers, Ravi Coltrane, Marc Copland, Mark Feldman, Fred Hersch, John Hollenbeck, Tony Malaby, and John Surman. Drew has toured North and South America, Europe, and Asia, and has served as Artist-in-Residence at St. Petersburg Conservatory in Russia and at the Paris Conservatoire. He has received grants from the National Endowment for the Arts, Meet the Composer, and Chamber Music America, and currently resides in New York.

Drummer Mark Ferber can be heard on over 100 recordings. Ongoing projects includes the Gary Peacock Trio, Ralph Alessi’s ‘This Against That’, the John O’Gallagher trio, the Brad Shepik Organ Trio, and his twin brother, Alan Ferber’s big band and nonet. Past work includes tours and recordings with Lee Konitz, Jonathan Kreisberg, Jack Wilkins, Don Byron, Fred Hersch, Tony Malaby, Mark Helias, and Billy Childs, among others. Mark has taught extensively in the United States and Europe. He was a faculty member for the California Institute of the Arts, the Tavira Jazz Workshop in Portugal, the School of Improvisational Music (SIM), and is currently teaching privately out of the City College of New York. He was born and raised in Moraga, CA and received a degree in Biogeography from UCLA. Mark is an endorsing artist for Istanbul Cymbals. He lives in Brooklyn, NY.