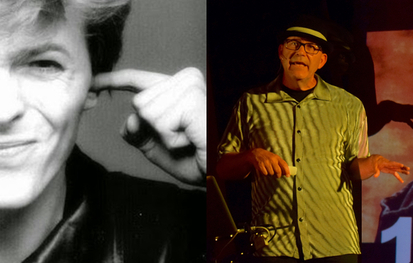 If you ask anyone familiar with David Bowie to name their favorite phase of his chameleonic career, many will claim his groundbreaking "Ziggy Stardust" persona from the early 1970's, and most are familiar with his arena-rock, crowd-pleasing "Let's Dance" period of the early 80's.

True Bowie aficionados are fixated on the era between those two, his so-called Berlin Era, which many claim as his artistic high point, epitomized by the epic hit "Heroes" and countless electronic experimentations.

We pick up with David Bowie flat on his back in Los Angeles, a superstar finally after "Young Americans" and "Fame" vault him to the top of the American charts, but leaving him with a devastating cocaine addiction, subsisting on warm milk and peppers. He hooks up with heroin addict and unlikely sobriety partner Iggy Pop and moves to Berlin, the drug capital of Europe to clean up.

Incredibly, the plan works. Calling on Roxy Music alum and "non-musician" Brian Eno, Bowie releases "Low," "Heroes" and "Lodger" to critical confusion, and growing acclaim. Influenced by the arid Krautrock beat of Can and Kraftwerk, and informed by his his own funk rock rhythm section, Bowie begins to craft a new musical vocabulary featuring electronic experimentation and synthesized ambient soundscapes, all while creating some of the most emotionally charged music of his lifetime.

Commonly known as The Berlin Trilogy, this session encompasses a full six albums by Bowie and his companion Iggy Pop, most NOT recorded in Berlin. And while collaborator Brian Eno is often incorrectly given credit for producing these records, he actually co-wrote and created electronic atmospheres that inspired some of Bowie's most ethereal recordings, all three of which were produced by Tony Visconti.

Drawing on the just-released boxset "A New Career In A New Town" which includes Visconti remixes of "Lodger" and the live "Stage" album, plus the 2017 book, "David Bowie: A Life" by Dylan Jones (plus countless recently surfaced rarities), we throw fresh light on this seminal, life-affirming period in the storied career of (arguably) the most influential artist of our time.