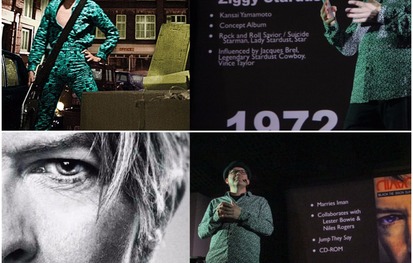 Part 1 opens with a 9-year-old David Jones, inspired by the film Don’t Knock The Rock claiming, “That was my ambition, to be in a band playing saxophone behind Little Richard.”

It would be three more years before his Ziggy Stardust character takes off, triggering a manic run of hit singles, bracing concept albums, and bizarre personas, each one diametrically opposed to the last.

After exploding worldwide with "Young Americans," Bowie hits rock bottom, as the excesses of mid-1970’s stardom threaten to engulf him.

Part 2 begins with the artist living like a king, having achieved stardom far beyond imagination, but strung out on cocaine and subsisting on warm milk.

He flees his near-death existence in LA for the arid krautrock beat of Berlin, accompanied by the most unlikely of sidekicks, Iggy Pop.

Commencing with three acclaimed LPs known as “The Berlin Trilogy” in collaboration with Brian Eno, this session takes us through Bowie’s arena-sized celebrity with "Let’s Dance," and his not-always successful, but perpetually rewarding experiments in the 1980’s and 1990’s.

The session concludes with his mysteriously choreographed death following the symbol-laden albums "The Next Day" and "Blackstar ★", and includes a review of his newly released box sets and his final recordings.