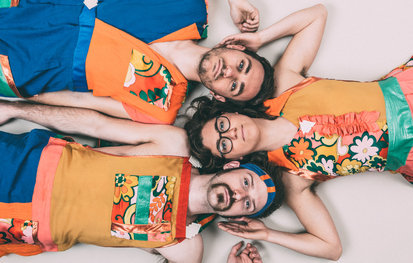 Tigue is a group of three percussionists with a fluid musical identity. The Brooklyn-based trio (Matt Evans, Amy Garapic and Carson Moody) makes their own kinetic and hypnotic blend of instrumental minimalism while opening up the possibilities of their instrumentation through commissioning and collaboration. Tigue’s debut album Peaks was released in 2015 with New Amsterdam Records with highlighted performances at the Ecstatic Music Festival, Bric Celebrate Brooklyn! Festival, and the Zemlika Festival in Durbe, Latvia. Recent commissions and premieres have included works by Molly Herron, Randy Gibson, Jason Treuting, Adrian Knight and Robert Honstein alongside collaborative ventures with Kid Millions and visual artist / sculptor Michael Mercil. These works have been presented in concert halls, galleries, black box theaters and universities throughout the country including EMPAC, Roulette, The deCordova Sculpture Park and Museum, Noguchi Museum, Yale School of Music, and Princeton University. Praised for their focused and “high octane” performances (New York Times), the Ohio-born band members have worked together since they were practically children.

Along with performing, the members of Tigue are dedicated to outreach and community projects. In collaboration with Make Music New York, the trio has led three 10-week music education programs with adult and adolescent inmates at New York City’s Rikers Island Correctional Facility, featured in both the New York Times and Rolling Stone Magazine. Working with inmates in both men’s and women’s facilitates, the trio shared the communicative nature of music through West African musical traditions and hand drumming culminating with inmate performances for the Rikers population. Tigue has also presented workshops and masterclasses with collegiate universities, elementary classrooms and community groups across the globe.