Free concert in Dance studio of the Music Settlement at W.25th /Detroit 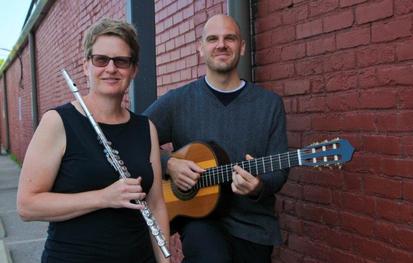 Classical guitarist Robert Gruca and flutist Linda White are thrilled to present a free hour-long concert at The Music Settlement’s new Ohio City campus! The music will feature four well known local composers with very diverse influences and writing styles. You’ll hear (1) the rhythmic excitement of a piece written by Matthew Saunders based on Morse code, (2) an eclectic work in four movements by Stephen Stanziano which culminates in a funk groove for electric guitar and amplified bass flute, (3) a heartfelt lament by Kevin Krumenauer that explores the losses we suffer during a life well-lived, and 4) a fun and imaginative look at Cleveland landmarks and weather phenomena with Marshall Griffith’s “Jazz Portraits of Cleveland”. Gruca and White will also add their own voices in a jointly-conceived piece which is largely improvised.

Come enjoy this one of a kind concert at The Music Settlement’s beautiful new campus!