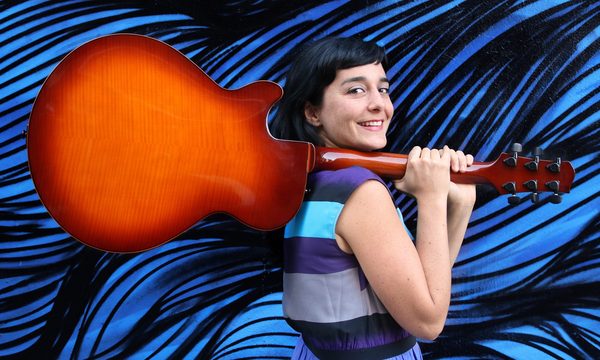 Camila Meza, equally prized as a vocalist, guitarist and composer, has brought a sound full of warmth, intricacy and rhythmic clarity to the New York jazz scene ever since her arrival from Santiago, Chile in 2009. Inspired by jazz, South American music and American popular song of many eras and genres, she has uplifted audiences worldwide with her rare combination of talents: assured and beautiful singing; highly advanced guitar (both self-accompaniment and blistering solo work); and vividly colorful, melodic songwriting that reveals complex layers with every listen.

Debuting in 2007 with Skylark, Meza followed up in 2009 with Retrato, again in 2013 withPrisma and in 2016 with the ambitious Sunnyside release Traces (produced by Matt Pierson, featuring Shai Maestro, Matt Penman and Kendrick Scott, among others). She won two Independent Music Awards for Best Adult Contemporary CD and Best Latin CD. Hailed by The New York Times as “a bright young singer and guitarist with an ear for music of both folkloric and pop intention,” Meza has also broken ground leading her ensemble The Nectar Orchestra with bassist/arranger Noam Wiesenberg whose CD, Ambar will be released in 2018. She also performs as a member of Ryan Keberle’s Catharsis and Fabian Almazan’s Rhizome, among other top jazz ensembles.

She is currently working on her upcoming album "Ambar" with her new project The Nectar Orchestra, in collaboration with bassist/arranger Noam Wiesenberg, which focuses on her compositions and arrangements with a string quartet.

Music for Camila is essential. She says "I hope to be able to connect on a deep level with the people that listen to me - outside of preconceptions of genre, style and language. I see music as one of the most universal expressions of human beings, that when is present, we're all equal and it can free us, that's why I think is so important to the world."

“…her impressive guitar playing serves the song as she seeks a perfect balance between poignant vocals and killer chops.” - Downbeat Magazine

Meza brings an appealing combination of lightness and depth to all the material, singing in a bright, clear voice against the agile stir of a first-­rate band. Her improvising, on electric or acoustic guitar, is serious business…” – Nate Chinen, The New York Times