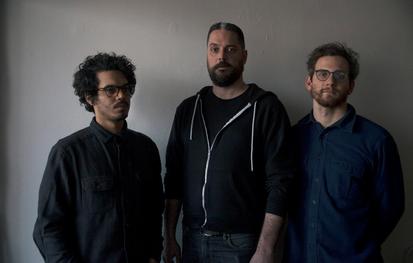 New Ghosts and BOP STOP celebrate the release of Rempis/Lopez/Packard Trio's new album, The Early Bird Gets on Aerophonic Records.

This working trio finds journeyman Chicago saxophonist Dave Rempis alongside two of the brightest talents in a younger generation of improvising musicians. Bassist Brandon Lopez is a musician whose virtuosity knows no bounds, currently one of the most in-demand bassists on the New York jazz and improvised music scene. Regular working partners include Nate Wooley, Gerald Cleaver, Ingrid Laubrock, Okkyung Lee, Tyshawn Sorey, and Ashley Fure. Percussionist Ryan Packard counters that depth with his own breadth of interests, working in contemporary classical ensembles, indie rock bands, and jazz groups alike around Chicago, not to mention his doubling abilities on electronics. His regular collaborations include work with Dal Niente Ensemble, Fonema Consort, MOCREP, ZRL, Skeletons, and Wei Zhongle. These two together provide a formidable rhythm section that can veer from hard-driving grooves to luscious soundscapes with total ease.

Active since the summer of 2017, the trio made its first studio recording in March of 2018, released in early 2019 on Rempis’Aerophonic Records imprint. This debut outing is titled The Early Bird Gets, and is perhaps the “jazziest” project any of them are involved with; a result that even the band members found surprising. But after honing their sound through live gigs in 2017 and early 2018, it became apparent that their free-improvised conversation kept returning to a similar destination: a three-way exploration of rhythm and tempo that left them working solidly within the jazz tradition. Not the one fixed into predictable stylistic corners, but the one defined by a spirit of boundless curiosity and exploration. A tradition they stretched back and forth like so much taffy.

The way these three unite into a groove is truly remarkable. Not as something to be closely adhered to, but as something to turn upside down, inside out, and ass backwards, as they expose every last facet of it. At times this means slowing it down, speeding it up, or splitting those two approaches up amongst the band simultaneously. At other times it means jumping to another dimension on the turn of a dime. And while that methodology may feel counterintuitive to the end result, it’s not. This band has a classic approach that has an inherent life and energy to it that dates back to the beginnings of jazz as an art form. It truly swings.