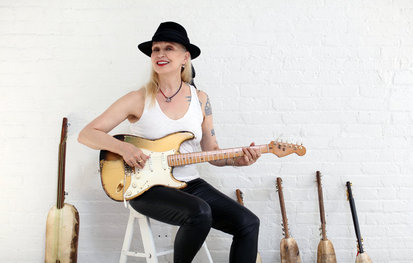 Leni Stern is an unstoppable force of bottomless energy. Her long-time fans know her from a successful jazz career that saw her touring the globe on the stage of every major festival and legendary club with bands that included some of the biggest heavyweights on the scene (Dennis Chambers, Paul Motian, Bill Frisell… to name a few). Everything changed when in 2005 Leni was first invited to perform at the Festival au Desert in Timbuktu, Mali. It was there that she would meet Bassekou Kouyate and his wife Ami Sacko, embraced by their family and their bands, she dove headfirst into the traditions of West African guitar and later the n’goni. It was a natural path from jazz, a personal journey to where her playing and the genre all began, a sort of spiritual exploration coupled with devoted study and practice.

In the past 13 years Leni has worked her hardest, forging a new sound that is all her own, composing, studying, practicing, with the rhythms and tonalities of West Africa through the chops of an accomplished jazz guitarist. It is finally, with ‘3’ (April 2018 LSR), that her most authentic voice can be experienced. Joined by her regular NYC-based trio of Mamadou Ba and Alioune Faye, Leni’s compositions pay humble homage to the drum patterns of traditional Senegalese folk songs. What emerges is a new repertoire of cross-pollinated ideas and reverence to jazz, to blues, to Africa, to a folk music of today’s diaspora.

It has always been a political act, a practice in strength and defiance, to be a woman and a bandleader, a female electric guitarist and composer, who puts out her own albums and manages her own career for over 25 years. In our current political climate, it is now even more essential to celebrate the immigrant experience that brought Leni Stern to the US from Germany and her African bandmates from Senegal and to revere the diverse languages which she speaks and sings in. It is Leni’s unique goal to trace the interconnectedness of music, history, and our humanity.

As a bandleader Leni has composed and released 21 albums to date and toured the world as both a teacher and performer, ensuring that the next generation of musicians are inspired to continue the mind-melding and cultural exchange that is so central to Leni’s musical intentions.

Recent years have brought some well-deserved recognition to this impressive career. In 2013 she was featured on WBUR, Boston’s NPR affiliate, in a feature piece. In 2015 she was the cover story for the Santa Fe New Mexican. In 2016 she was a headline performer at Africa Festival in Wurzburg, Germany. Leni was named in Guitar Player’s 50th Anniversary Issue (March 2017) as one of the Most Sensational Female Guitarists of All Time. In 2018 she was selected as an official showcase performer at South By Southwest (SXSW) in Austin, TX.