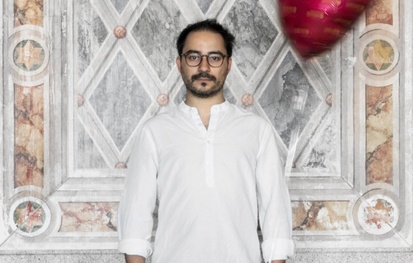 Born in Lisbon, André Carvalho is a Portuguese jazz bassist/composer, based in New York, whose music is described by AllAboutJazz.com as of “gentle beauty that brings you back to repeat listens” and by Jazz.pt as “so diverse as consistent, that confirms the predicates of a musician with much to enrich jazz”.

With two albums released under his own name, Hajime and Memória de Amiba, Carvalho represents his unique global perspective with a blend of contemporary jazz, Portuguese music as well as rock and classical. He has been awarded several prizes, including the Bucharest International Jazz Competition (Best Group award) and the Carlos Paredes 2012 Prize (which recognizes a contribution to maintaining a distinct Portuguese cultural identity in music).

He has also achieved outstanding results after being awarded several grants such as the GDA Foundation for recording Memória de Amiba, GDA Foundation for a Summer 2016 tour with his group in Portugal, Instituto Camões grant to present his music in Egypt, Cultural Ministry and the Portuguese Embassy in Bucharest grant to participate in the Bucharest International Jazz Competition, among others.

André’s accomplishments extend beyond the jazz world. Carvalho has performed with classical orchestras including the Ibero-American Orchestra (under Gustavo Dudamel), Anton Webern Orchestra (under Franz Welser-Most and Heinrich Schiff), Lisbon Metropolitan Orchestra (under Michael Zilm), among others, as well as contemporary ensembles such as Octothorpe. His interest in Fado, Portugal’s traditional music, led him to perform with important names of this genre, such as Carlos do Carmo and Cristina Branco.

As a Fulbright grantee, Carvalho relocated to the United States in 2014 where he finished his Master of Music (MM) in jazz performance at the Manhattan School of Music. André started his music studies in Lisbon at the Academia de Amadores de Música (with Fernando Flores) and the Hot Clube de Portugal, while finishing his first Bachelor (in Computer Engineering). Carvalho also has a Bachelor in classical double bass (in the class of Josef Niederhammer) from the University of Music Vienna, Austria.

Currently, he leads his own group, which features internationally acclaimed musicians. The musicians for the gig at BOP STOP are TBD.