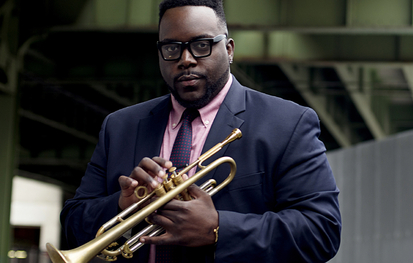 From his beginnings as one of Chicago’s most thrilling young trumpeters, to his current status as an internationally renowned musician, composer and bandleader, Marquis Hill has worked tirelessly to break down the barriers that divide musical genres. Contemporary and classic jazz, hip-hop, R&B, Chicago house, neo-soul—to Hill, they’re all essential elements of the profound African-American creative heritage he’s a part of. “It all comes from the same tree,” he says. “They simply blossomed from different branches.”

That mission to bring styles together, complemented by Hill’s absolute mastery of his instrument, is a through line connecting his many achievements. It can be heard on his latest album, Modern Flows Vol. II, with its seamless blend of jazz interplay, hip-hop-infused rhythms and socially conscious spoken-word. It’s integral to The Way We Play, his Concord Jazz debut from 2016, where Hill and his musicians reinvent jazz standards using their generation’s wide- ranging influences. It marks the four records Hill self-released before November of 2014, when he won the Thelonious Monk Institute of Jazz competition and became a presence on the global scene virtually overnight. And it defines the revelatory live dates by Hill’s longtime working group, the Blacktet, which the Chicago Tribune called “a remarkably polished, immensely attractive ensemble.”

For Hill, playing and listening without limits has long been an instinct. “It comes naturally; that’s the way I hear the music,” he says. “I came up in a household where my mom played Motown, R&B, Isley Brothers, Barry White, Marvin Gaye. Then I received my first jazz record, by Lee Morgan, and that was added to the collection. ... I truly believe that the music is all the same.”

Born in Chicago in 1987 and raised on the city’s culturally rich South Side, Hill began playing drums at age 4, before switching to trumpet in the 6th grade. He attended high school at Kenwood Academy, excelling in its revered jazz-performance program, and was mentored by Bobby Broom, Willie Pickens, Tito Carrillo and other Chicago greats through the Ravinia Jazz Scholars program. Hill earned his bachelor’s in music education from Northern Illinois University and his master’s in jazz pedagogy from DePaul University. During college he made gigs and sessions around Chicago, jamming with and absorbing wisdom from the likes of Fred Anderson, Ernest Dawkins and Von Freeman. Even then, Hill was known in town as a stunningly gifted trumpeter with a soulful, highly textured tone. His sound is now somehow both deeply distinctive and a tour through jazz-trumpet history, evoking the high-drama stillness and space of Miles; the undeniable virtuosity of Clifford Brown and Freddie Hubbard; the groove- savvy phrasing of Lee Morgan and Donald Byrd; and much more.

Well before Hill won the Monk prize—arguably the most important jazz competition in the world—his reputation for brilliance was firmly established in the Midwest, as a member of the Chicago Jazz Orchestra, an in-demand sideman and a bandleader. He also developed into a precocious, determined young label owner, and has released five acclaimed discs—New Gospel,Sounds of the City, The Poet and Modern Flows Vols. I and II—through his Black Unlimited Music Group imprint. “Just having my personality, there’s nothing like being in control of what you produce and put out into the world,” he says. “It’s a great feeling.”

A move to New York in 2014 helped him gain wider exposure and new opportunities—though he frequently returns to his hometown for gigs and projects—and in recent years Hill has garnered an enviable spate of press. Previewing a Blacktet show, the New Yorker said, “His performances and recordings reveal a smart post-bop player who circumvents genre clichés by incorporating elements of hip-hop and contemporary R. & B.” Of The Way We Play, DownBeatwrote, “The groove-laden arrangements provide the perfect soundscape for Hill’s fluid improvisational style, which, with its glass-like lucidity, recalls the crisp elegance of hard-bop stalwart Donald Byrd.” In 2016, Hill earned first place in the “Rising Star–Trumpet” category in that magazine’s storied Critics Poll. Throughout his journey, he has supported and guested with a who’s who of jazz that includes Marcus Miller, Dee Dee Bridgewater, Boney James, Kurt Elling, Joe Lovano and Hill’s trailblazing Chicago peer Makaya McCraven.

Today, Hill maintains a nonstop touring schedule with the Blacktet, and the intensely interactive, utterly unique band has become a kind of graduate school for next-level talent—Hill included.“One of the most beautiful things about leading a group is the flow of knowledge and energy that we bounce off of one another,” he says. “Each member contributing their distinctive voice is what truly makes the music and magic happen.”