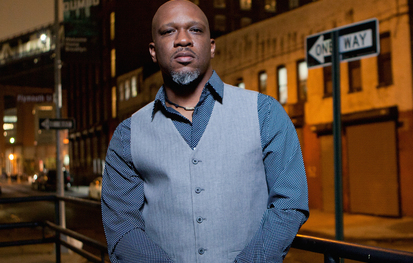 Many of you had the chance to see Orrin Evans at BOP STOP when he performed with The Bad Plus. Now is your chance to hear Orrin with his own trio! Featuring:

For more than two decades, Orrin Evans has made an art form of the unexpected. With more than 25 albums to his credit without ever relying on the support of a major label, Evans has become the model of a fiercely independent artist who’s made a habit of rattling the jazz world’s confining cages. That determination has paid off in accolades like topping the “Rising Star Pianist” category in the 2018 DownBeat Critics Poll and receiving a Grammy-nomination for his Captain Black Big Band album "Presence" in the same year.

As a daring pianist, Evans combines raw-edged vigor and left-field nuance into a sound wholly his own. As an adventurous composer he traverses stylistic boundaries with abandon, drawing on full-throttle swing, deep rooted blues, expressive soul or bracing excursions into the avant-garde. As an audacious bandleader, he delights in daring fellow musicians to take bold risks, whether in mutable small group settings or his raucous Captain Black Big Band. As an inventive collaborator, his projects range from the nerve-rattling collective trio Tarbaby to the latest twist in his never predictable story, becoming the first new member to join The Bad Plus in the band’s nearly 20-year history.

Evans pays homage to his mentors and influences while passing the torch to new generations. He’s recently performed concerts paying homage to the late Geri Allen alongside drummer Terri Lyne Carrington and a celebration of the centennial of Thelonious Monk at Duke University, along with curating concert series at Philly’s South and New York’s Smoke. As an educator he directed the Kimmel Center for the Performing Arts’ Jazz Standards and taught at Connecticut’s Litchfield Jazz Camp.