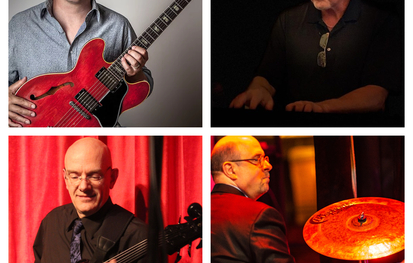 EEJ Firelands Quartet makes their BOP STOP debut! For this performance the band will be playing the music of pianist Duncan Crooks along with additional compelling bop standards.

Duncan Crooks is a jazz pianist and composer who has been playing professionally for over 30 years, beginning as a teenager in R&B/Fusion bands in Cleveland, Ohio, and Los Angeles, California. Originally from Cleveland Heights, and a graduate of Cleveland Heights High School, Duncan went on to Capital University in Columbus to study music and arranging. While at Capital, Duncan was the winner of the Diversified Music Publishers Award for “Best College-level Composer.” From there, he moved to Boston to attend the Berklee College of Music where he graduated summa cum laude. Over the years, Duncan has continuously played with the finest jazz musicians and vocalists Northeast Ohio has to offer, in addition to touring with The Glenn Miller Orchestra, and performing with Kenny Burrell, Nick Brignola, and other luminaries.

Jeff Slater earned his bachelor's of music in music theory and french horn at Baldwin-Wallace University and did master's work in classical and jazz music theory at the University of Wisconsin at Madison and Truman State University. Jeff plays both electric and upright bass and is well versed in all styles of jazz, R&B, rock, and world music.

Dan Bruce has performed on over twenty five albums as a sideman. As a jazz performer and recording artist, He has had the opportunity to work with a number of eminent musicians including Seamus Blake, Ali Jackson, Lynn Seaton, Dan Wall, The Cleveland Jazz Orchestra, Marvin Stamm, Dave Restivo, and Rose Colella. He has been a featured composer in Fingerstyle Guitar Magazine, and remains a regular contributor. Daniel released A Single Thread, his first album as a leader, in 2008 on NohJoh records. He most recently released a record with his band :beta collective.